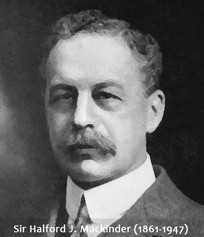 After early schooling at Queen Elizabeth Grammar School, Gainsborough (1870-1874) Mackinder went to Epsom College, boarding school in Surrey, from 1874-1880, before going up to Christ Church, Oxford. In the years 1880 to 1883 Mackinder studied animal morphology receiving a first class degree in natural science. In his fourth year Mackinder read history, gained a second class degree, and was elected to a research scholarship in geology. In 1885 Mackinder moved to London, studied law and was called to the bar from the Middle Temple (1886).

At the Royal Geographical Society he delivered his famous paper on “The Scope and Methods of Geography” and later in the same year, 1887, was appointed Reader in Geography at Oxford. With help from the RGS, Mackinder founded the Oxford School of Geography in 1899, the year in which he led an expedition that made the first ascent of Mount Kenya.

While at Oxford, Mackinder served as the Principal (1892-1903) of University College Reading, today the University of Reading. In 1903 he became the second director of the London School of Economics, resigning in 1908 to follow a political career. He was a Member of the British Parliament from 1910 to 1922. He was also appointed by the then Foreign Secretary, Lord Curzon, to be British High Commissioner to South Russia between 1919 and 1920.

*This biography was provided by Brian W. Blouet, Huby Professor of Geography and International Education at the College of William and Mary in Virginia. He is the author of Halford Mackinder: A Biography, Texas A&M University Press, 1987 (still in print), Geopolitics and Globalization in the Twentieth Century, London, Reaktion Books, 2001, and the entry on Halford Mackinder in the Oxford Dictionary of National Biography (2004). He also edited Global Geostrategy: Halford Mackinder and the Defence of the West, London, Frank Cass, 2005.